Happy belated 2015, everyone! We here at Trivium Racing are pretty pleased with 2014. We got some sun, we had some fun events, and made plenty of friends. Those friends helped us make those events fun, and even got some sun too!

That brought us to two thoughts. 1) We really miss the sun part. Seriously, that summer glow is gone. 2) Trivium Racing has some great athletes that have some interesting stories and ambitions. We’d like to give you the chance to get to know these people.

So without further ado, we would like to introduce everyone to the Friday Tri(vium) Spotlight, still a working title, and a good friend of Trivium Racing, Julie Greene. 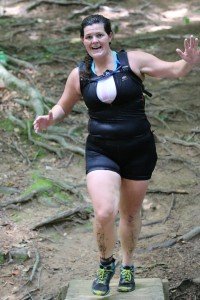 Profession: ……………….Lab Specialist for the City of Greensboro (Environmental Chemistry) and Assistant Swim Coach for the GCY Makos

I sat down with Julie to get to know who she was and what made her tick.

It’s going good so far. Although it’s only January, I have a lot of plans for this year. I’m looking forward to it.

What were you doing this time last year?

I did the Hot Chocolate 10K in Asheville. It was a really fun race that was right before my birthday.

What was your favorite Trivium Racing Event?

What was your best/worst race last year?

My best race had to be the Doggettville 12 Relay. It was a huge hurdle for me because after about 5 hours you start to get worried if you’re going to make it. Should I eat, should I get more water, can I even keep going? You just have to really get past the mental aspect of it and push yourself physically. I ended up doing 44 miles. My worst is a toss up between Pilot Mountain Payback and the Xterra USA Championship (in Utah).  I say that because they both were physically daunting. Mostly because you’re going up mountains for both. The Xterra race especially because the bike portion took me forever. I’ve never wanted to quit a race before, but I knew I had to finish. Not to mention, I had done 44 miles the week before at Doggettville. Luckily, I got in to the transition for the run right before the cut off. Despite the difficulties I was happy in the end because I was tested and feel like I passed because I never quit.

Did you make any alliances or rivalries?

Technically I have an alliance but no real rivalry. A friend of mine and I help each other train. He helps me on the bike at the Whitewater Center and I help him with his swim. However, I do keep a mental count of how many time I beat him in some of the races we end up doing.

So from what it sounds like, you really enjoyed 2014. Would you do it all over again?

Of course! I did a lot of events and had a lot of fun.

I know you mentioned that some races tested you. Is that what motivates you to go out there and compete?

Definitely. I’m really competitive and enjoy challenging myself. If you tell me I can’t do it, I’m going go out and do it. Plus I’m a high-energy person. I don’t do well with just sitting around.

Are you a huge fan of traveling for races or would you rather stay local?

I like to support local events cause they are fun and I know the terrain but I’m always looking for a new trip somewhere else. It’s not always easy traveling with my bike but still worth traveling.

Do you make your own training schedule or do you work with someone else?

I work with the Streakers with running and other workouts. Since I’ve done swimming for so long I make up workouts with a friend. People always ask why I don’t get injured and it’s probably because I do so many different things (As she knocks on wood). Plus I did ballet when I was younger so that helps with my flexibility.

What’s the most creative workout you’ve done in the past year?

It was a 3 mile trail run out. On the way back, you stop every 3 minutes to do either 10 jumping jacks or 10 lunges. And to top it off, whenever we came to a bridge, you had to cross doing the inch worm.

After all this competition and working out, what would you say is your favorite meal?

That’s easy. A burger and a beer. I actually wouldn’t be mad if there was a Coca-Cola. But it has to be a Coca-Cola. No off brands. I can tell the difference.

With all this training and competing does work ever interfere?

Not at all. Work comes first in my mind. There is a difference between work and training though. I don’t really move around that much at work so it’s almost like rest for me. Since I don’t really take anytime off, I use my time off for events and training.

So what’s the goal for 2015? Anything you’re really focused on?

I’m looking to not stress out this year. I know how last year went so I feel pretty comfortable. I’m training for the Bel Monte 50 Miler and on schedule.